Current Position: US Representative of IL District 2 since 2013
Affiliation: Democrat

Other Positions:
Vice Chair, House Committee on Energy and Commerce

i
News from Congresswoman Robin Kelly

“The Build Back Better Act will be one of the most transformative pieces of legislation for Americans in generations, and I am proud to have ensured that this bill will include major steps forward in reducing health inequities,” said Congresswoman Kelly. “For too long, Black Americans, people of color, and low-income individuals have been left behind when it comes to healthcare access, leading to disproportionately higher rates of certain illnesses, maternal mortality, and death. No more. We must pass the Build Back Better Act to bring reliable, affordable healthcare coverage to all Americans regardless of where they live or what they look like.”

Congresswoman Kelly’s leadership on several key health equity provisions were key to their inclusion in the final bill text. Inclusion of the below priorities was based on legislation Congresswoman Kelly authored.

Gun violence is a public health crisis, but at the federal level we are neither doing enough to prevent it nor to mitigate its impacts. We have seen the mass shootings that have claimed the lives of shoppers, salon workers and pedestrians so far this year. However, what causes deeper concern is how prevalent and pervasive gun violence is in the daily lives of our community members.

We are battling a public health epidemic, but we are not treating it that way. We must address the far-reaching health risks of gun violence and the systemic racism that normalizes the deaths of young Black men. Each life lost to gun violence is a tragedy, and, unfortunately, deaths are not the only impact. For every shooting, countless people are traumatized, left to grieve a loved one, angered by the event and left increasingly anxious about the safety of their communities.

The mental health impacts of gun violence are both cause and effect of this tragedy. Without addressing the generations of trauma some communities have experienced, we will not be able to pull ourselves out of this epidemic. Of course, there are also the physical and financial costs we must address. People injured by gun violence often face challenging and expensive recoveries, including surgeries and physical therapy. Many live with disabilities for the rest of their lives.

Congresswoman Robin Kelly has dedicated her career to public service as an advocate for Illinois families. Since being elected to serve the 2nd Congressional District in 2013, she has worked to expand economic opportunity, community wellness, and public safety across the state, championing numerous initiatives to generate job growth, reduce health disparities, and end gun violence.

A staunch champion of common sense gun reforms and responsible community policing, Representative Kelly is a Co-Chair of the Congressional Gun Violence Prevention Taskforce and is the author of The 2014 Kelly Report on Gun Violence in America, the first-ever Congressional analysis of the nation’s gun violence epidemic that offers a blueprint for ending the crisis.

Prior to her election to Congress, Kelly was a member of the Illinois House of Representatives, served as Chief Administrative Officer of Cook County (the second largest county in the United States) and was Chief of Staff to Illinois State Treasurer Alexi Giannoulias – becoming the first African American woman to serve as Chief of Staff to an elected constitutional statewide officeholder.

The daughter of a small business owner and postal worker, Congresswoman Kelly moved to Illinois to attend Bradley University in Peoria, where she earned her B.A. in psychology and an M.A. in counseling. She later received a Ph.D. in political science from Northern Illinois University.  She lives in Matteson with her husband, Dr. Nathaniel Horn, and has two adult children, Kelly and Ryan.

*Due to COVID our offices are virtual and constituents should call 708.679.0078 for assistance.

Robin Lynne Kelly (born April 30, 1956) is an American politician from Illinois who has served as the U.S. representative from Illinois’s 2nd congressional district since 2013. A Democrat, Kelly served in the Illinois House of Representatives from 2003 to 2007. She then served as chief of staff for Illinois State Treasurer Alexi Giannoulias until 2010. She was the 2010 Democratic nominee for state treasurer, but lost the general election. Before running for Congress, Kelly served as the Cook County chief administrative officer. After winning the Democratic primary,[1] she won the 2013 special election to succeed Jesse Jackson Jr. in the U.S. House of Representatives.[2]

The daughter of a grocer, Robin Lynne Kelly was born in Harlem[3] on April 30, 1956.[4] Hoping to become a child psychologist, she attended Bradley University in Peoria, Illinois,[3] where she was a member of Sigma Gamma Rho sorority. At Bradley, she obtained her Bachelor of Arts in psychology (1977/1978) and her Master of Arts in counseling (1982).[4] While in Peoria, she directed a “crisis nursery” and worked in a hospital.[3]

Kelly earned her Ph.D. in political science from Northern Illinois University in 2004.[4]

From 1992 through 2006, Kelly served as a director of community affairs in Matteson.[4]

In 2002, Kelly defeated a ten-year incumbent Illinois state representative in the Democratic primary. In November, she defeated Republican Kitty Watson, 81%–19%.[5]

In January 2007, Kelly resigned her House seat to become chief of staff to Illinois Treasurer Alexi Giannoulias. She was the first African-American woman to serve as chief of staff to an elected constitutional statewide officeholder.[9] Kelly was appointed Cook County President Toni Preckwinkle‘s chief administrative officer in 2011.

In 2010, Kelly ran for Illinois treasurer. In the Democratic primary, she defeated founding member and senior executive of the Transportation Security Administration Justin Oberman, 58%–42%. She won most of the counties in the state, including Cook County with 59% of the vote.[10][11]

On February 26, Kelly won the Democratic primary in the heavily Democratic, black-majority district with 52% of the vote.[16][17] In the April 9 general election, she defeated Republican community activist Paul McKinley and a variety of independent candidates with around 71% of the vote.[2] 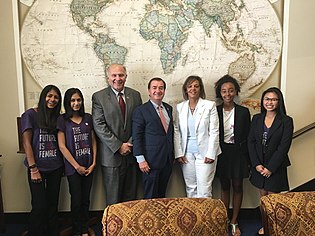 Kelly lives in Matteson with her husband, Nathaniel Horn.[3]

Learn more about legislation sponsored and co-sponsored by Congresswoman Kelly.

OnAir membership is required. The lead Moderator for the discussions is James Lillard. We encourage civil, honest, and safe discourse. See Terms of Service for curation guidelines.

This is an open discussion on the contents of this post.